White Water is a 12-acre waterpark with a lazy river, mat racers, a play area with a tipping bucket and much more. It features attractions that cater to a broad audience, but it also had an aging, industrial-style play unit named Coconut Grove. The park’s 20-year-old play unit was a relic of the past when waterparks moved away from “adult swim” time to building areas that cater to guests by age group.

The former Coconut Grove play unit was designed for children aged 2 to 12. However, it lacked the interactive and water play features families expect from a waterpark today. Herschend’s creative director had a vision and chose our Splashtacular team to bring it to life.

Our team worked closely with the creative director, taking his specific art style, vision and sketches and matching them with colors and 3D models to replicate exactly what he wanted.

The exciting new play unit has nearly 30 individual features, all built for interactivity. The features are built and sized to accommodate parents who want to join in on the fun. The new Coconut Grove play unit has multiple racers, a flume ride, shade structures, water blasters, bubbler fountains, hose jets, tipping buckets and more, all encouraging interactive play. To cut traffic flow in half, ease crowding and give kids options to come down, we included two entrances instead of one.

Making its debut this summer in 2017, the new play unit is a “Splashtacular” hit with guests of all ages. “Our guests say it’s a very nice improvement to the park and an excellent addition for the kids. There are lots of interactives, and the slides are great as well. We’ve seen families having a hard time getting their kids to leave the area so they can enjoy other rides. Splashtacular has been very cooperative with the assembly of the structure. We are thrilled with the play structure as an addition to our waterpark,” says Tim Widger, Maintenance and House and Grounds Supervisor, Silver Dollar City. 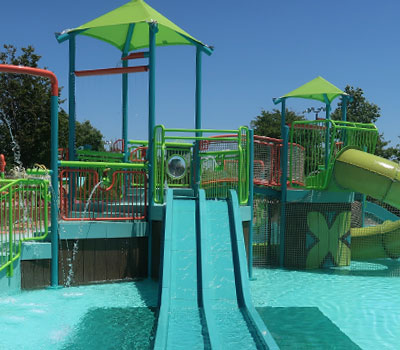